A few weekends back, Matt and I went to Latrobe to visit his family. I really like visiting them. There’s not always a lot to do, but there is something about the vibe that is relaxing. There is a real sense of caring that can be felt, even if all we do is sit around and watch old movies.

In this trip, Matt and I were going to take his sister, Becca, to the Mattress Factory, Church Brew Works, and the Pittsburgh zoo. I think this is nuts, but Becca, who lives about an hour from Pittsburgh, had not been to any of these attractions Except the zoo. She has been to the zoo.).

It was pretty fun as a non-native Pittsburgher to be giving a Pittsburgh native a tour of her own city. But that’s Matt and my thing. We love introducing people to new experiences and watching their reactions to them. We seek out these new experiences for the sole purpose to share them later with unsuspecting friends and family.

At this point, you may be wondering why anyone would want to go to a mattress factory. In fact, Becca’s boyfriend had the same reaction. Here is the low-down on the Mattress Factory: it historically was in fact a mattress factory at one time, but has since been taken over and revamped to become an instillation art museum. Instillation art, generally, is one of a kind art made to fit the space it is contained in and designed for the viewed to step inside the space and experience the art as an active participant. For those of you who live in the D.C. area, you may recall the long lines some years back when Yayoi Kusama’s mirror infinity rooms were at the Hirshhorn. Those mirror rooms are considered instillation art. AND you can visit two of them whenever you want at the Mattress Factory as they have two of her infinity rooms as part of their permanent exhibit!

The Mattress Factory was awesome as always. And as always, it did a wonderful job of affirming how Matt and I are completely different people, but also how we come together. For example, there are three distinctly different exhibits that stood out to us. It is of no surprise to me that Matt really enjoyed the architectural and building materials-based rooms created by ­­­­Dennis Maher. I loved the works done by Greer Lankton, a trans woman who suffered from addiction and eating disorders. Our likes should not surprise anyone who knows us. Matt, the structural engineer, loved the structural elements of one exhibit. Ryan, the mental health therapist, loved the raw emotional expression of the exhibit that illustrated high levels of emotions.

But where we come together is in our favorite exhibit. Matt and I both loved the work by a set of twins from Brazil that collaborated to create a brightly colored and patterned room. They went by the name of OSGEMEOS. There were elements of music, myth, and motion. The room instilled a strong feeling of joy. I could have lived in that room!

There were several other exhibits that were just as wonderful. There were also a few that we felt were duds. Art is in the eye of the beholder. I guess during a few exhibits, Matt and I must have blinked. 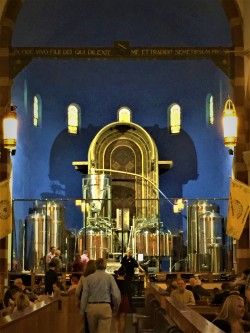 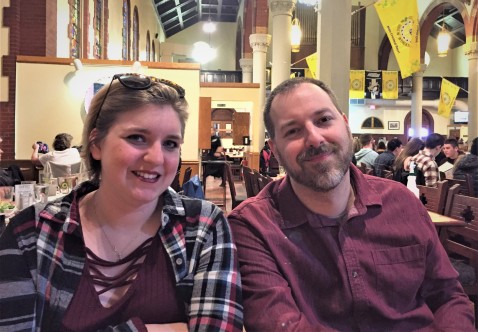 For lunch, we headed to the Church Brew Works. Matt and I are drawn to places with odd history, and the brewhouse had such a history. The Church Brew House started off as a church. It is beautifully ornate. Beautiful large wooden doors, like the kind you imagine existing in the 1500s. In fact, the church was built in the early 1800s. At some point, after the decline in attendance in the church, the church lay dormant and it was under threat of being demolished. In 1996 it was brought back to it’s original goory, but this time with a brewery inside. This brewery saved the church from demise.

Walking into the brew works is quite spectacular. You are met with rows of stained glass. Old pews had been repurposed into booth seats. And where the alter once stood, was now polished brewing tank. To add to the hybridization of the church and brewery are all the church/religion-related names of all of the beers the brewery produced.

As with the Mattress Factory, Matt and I enjoyed sharing this new experience with Becca. Especially, their specialty perogies!

I love otters. They are fun, agile, and clearly bind with each other. The otter exhibit also entailed a view of the otters at the surface of their exhibit and an underwater perspective. Below are some videos of these otters (in the third video, you may here me responding to a woman who called the otters “ugly”. You can’t here her in the video, but you can definitely here me, lol).

This trip to the zoo was particularly awesome. We believe that this is because we arrived to the zoo around 3PM. It turns out that this is about the time that all of the animals get fed. That meant that all of the big cats were awake and waiting. In my entire life, I don’t think I have ever been at the zoo when the big cats were actually awake. As it turns out, big cats act just as domestic cats when it is time to be fed. We could hear the lions roaring throughout the zoo as they waited to be fed. We watched as a tiger paced back and forth waiting for his meal (at the Pittsburgh zoo, there is a place where you can stand incredibly close to the tigers, with only glass between the two of you. The tiger came directly up to the glass and we made eye contact. It was a spiritual and primal experience. I could feel the intense fear that one might feel if they were to come face to face with such a massive beast. I always knew that tigers were large, but I had no concept as to how large they were. This tiger’s head came up to and was as wide as my chest.) We even got to see the sharks and eels get fed. The eels, which usually stay hidden, swam out into the open to be fed. We also saw the trainers using targets attached to poles to assist zebra sharks in being fed. We assumed that their eye sight may not be that great since they needed to the assistance of zookeepers to find their food.

We also got to see a gorilla nursing her young. Upon seeing this, I melted. We then watched as the baby gorilla began to emulate who were surmised with his father. It was amazingly cute. What a moment!

The most notable interactions were between a mother of one set of twins and a father of another. The two joked about trading the children to each other. I found myself wanting to volunteer to take them. I was also becoming angry that they would threaten to leave their children. I knew that was something that I would never do!

The rest of our Latrobe visit went as usual. We spent time with Matt’s family, enjoyed conversations over dinner at a local restaurant, and discussed family memories. It was a good time for all.