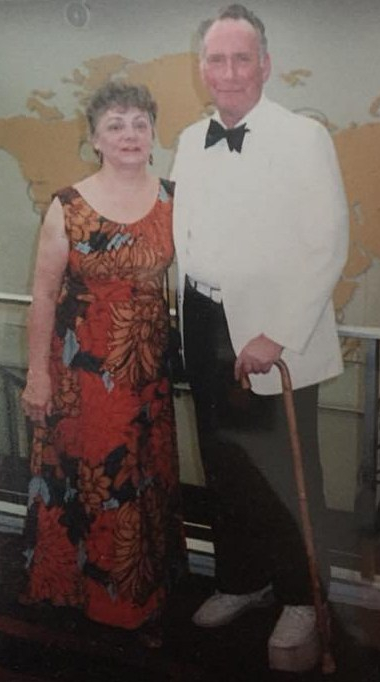 I have spoken with some frequency about my grandmother in these blog posts, but I don’t want to take away from my grandfather. He too instilled many values in me. Among them were being kind and friendly to strangers (I am often the guy at CVS who has a stranger walk up to him in line and tell me their life story), my curiosity about other people (not so much the details of their life, but who they are as a person), experimenting with food (he loved putting applesauce in his bowl of Cheerios; I have recently taken to adding soy milk to Greek yogurt and fruit with vanilla and orange extract), but most of all, he imparted his fascination and unconditional love of animals. To put his love of animals in context, let me provide you with some background:

At his funeral, I had learned that he was a gunner in a tank and had survived the storming of Normandy. This was a surprise for a number of reasons. The first is that he never talked about it (probably due to the trauma). But secondly, and most importantly, he was the friendliest, most docile, loving, kind-hearted man. The only time I ever saw him upset was when my grandmother wouldn’t allow him to take the scenic route when driving to a destination or when she would complain about her “curls” if he ever cracked the car windows on a scenic drive.  (Although, there is a family story that my grandfather got into a fist fight with cousin Lesley’s grandfather due to Lesley’s grandfather’s racist behavior. Although, I do not condone violence, I am willing to look away on that one).

He was awarded two purple hearts. He had been shot and had also been in a blown-up tank. The injuries left him needing two knee replacements. His body accepted one, but not the other. This meant that he had a brace that he wore for the rest of his life. Additionally, his one shoe would need a lift installed, as over time, his leg became shorted and shorter. This meant that he did not move with a whole lot of speed, and he was at a much higher risk at falling. It was fairly commonplace to overhear my grandmother talking about the “scene” he caused when he fell at the grocery store and his coupons flew all over the place.

Here is this man who can walk with great difficulty. One would think that taking him to the National Zoo would probably be a nightmare for him. This was far from the case. My father loves telling the story about how he lost Eddy (Grandaddy, my grandfather) at the zoo. My dad would tell you that he would be looking behind to see how far back he had fallen, just to find out that he was two exhibits ahead.

As a child, when my grandparents would watch me, I would watch “Lassie”, “Flipper”, “I love Lucy”, and “Gilligan’s Island” with my grandmother. But with my grandfather, we would watch animal documentaries. He would take me on little field trips to local pet stores to show me the animals and teach me about them. One of the most influential and validating things he ever told me was “You know Ryan, in the animal kingdom, the male birds are often the prettiest.” I like to believe that this was his way of telling me that he was okay with me being gay. (I hadn’t come to this conclusion until after his passing and my great uncle, his only sibling, came out to me as gay that same year).

Animals have always been a big part of my life. I have had hamsters, guinea pigs, pet mice, a cat, dogs, lizards, and fish. Much like my grandfather, I tried breeding animals, mice, to learn more about them. Their genetics, social behavior, and intelligence (he had bred cockatiels, betta fish, and chickens) Every animal that I have ever had has been a big part of my family.

Growing up, all I had wanted was a dog. In fourth grade, after years of begging for a dog, my father got me and my brothers a back lab. Zack, who I had named after the black power ranger and the main character from “Saved by the Bell”, immediately was considered a member of the family. My grandfather treated him as though he were another grandchild. It is through his example, that I have recognized the emotional value of having an animal as a family member.

Dogs, in particular, are amazing animals. The true unconditional love of a dog is something that can’t be mimicked. Their genuine excitement and elation to be in your presences provides me with the feeling that you are important. You are the most important person in their lives. They are your companion and you are theirs, FOR LIFE.

For all of these reasons, ten years ago, my ex, Devin, and I bought a Pembroke Corgi (we lived in a condo at the time and so we wanted a small dog with a big dog personality. We wanted to adopt a corgi from a rescue, however, no rescues in the tri-state area had any corgis- including the corgi rescues!). We named him Darwin.

These past few weeks, Darwin has not been doing well. We found out earlier this week that he has a systemic form of lymphoma. The emotional pain Matt and I have been experiencing is something I could not liken to anything I have experienced before. The closest for me was losing my grandmother.

The past few days have been spent in grieving and phone calls to the vet to acquire more medications to make Darwin more comfortable. We have taken the time to not only ensure he’s comfortable, but taking him on “Darwin-led” walks. These are walks where he is off leash (he’s earned this level of trust, and as a herding dog, he won’t go far), played more fetch with him, and even bought him squeaky toys (one of his favorite things to do is to find the squeaker and destroy it).

Matt and I have surfed the first wave of grief- finding out about the lymphoma. The second wave is yet to come: letting him go. I know that grief hits me particularly hard, especially when it comes to a close family member. In preparation for this, I have already started putting together things to memorialize my little buddy, since I know I will be too devastated to try to do it in the throws of grief. We have taken his paw prints and put them in a frame, I have written him a letter to read to him on his final day, and I have taken some portraits photographs of him.

Despite having all of this pain, having Darwin for the past ten years was worth it. Having to lose him is awful. Watching him become increasingly ill is devastating. But despite all of that, it has given me the opportunity to grow. I am enjoying the additional bonding I have had in assisting Darwin to eat, walk, and going up stairs. I feel like part of me is growing as I continue to assist him, through my pain, and to continue giving him love and support.

The values, lessons, and experiences I have illustrated in this blog are character building. It is my hope that when we finally do adopt, that we will be able to instill the same values my grandfather instilled in me. I am hopeful that Matt and I can demonstrate how to care for others not just when they are in good health and are fun to be with, but also when their health is in decline, it is emotionally taxing, and one of the hardest things you have ever done. I hope that we will have the opportunity to demonstrate not only to our child, but to every member in our household, both two and four-legged, unconditional love.

2 thoughts on “Losing a Family Member and Friend”