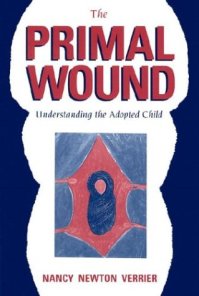 I want to start out by noting that this is one of the touchstone pieces of literature regarding adoptees. This book was first copywritten in 1993 and has had 28 reprintings. It is clear that Verrier has deep professional knowledge, personal experience, and clinical experience working with adoptees and adoptive families.

This book has been broken down into four distinct parts. In order to best convey my thoughts and opinions on this book, I find that it may be the most useful if I reflect on each part of this book separately, and then provide an overall review.

Part I: The Wound

This portion of the book is perhaps the most intense. It goes into detail about the trauma that is imposed on a child who is given up or “relinquished” by his or her birthmother. Verrier goes on to explain that bonding between mother and child happen prior to birth and that by taking away a child from its mother results in a crippling trauma that will affect the child for the rest of its life.

As someone who works with trauma and has worked with several birth mothers, adoptees, and children within the foster care system, my experience mirrors Verrier’s. The only thing that I wish was more prevalent were studies that better illustrate this. Verrier also voices this frustration. With that said, should there be another printing of this book, I think more academic studies in this area would be helpful. Without it, this section could be easily dismissed by those who believe that because a baby does not have memory of trauma, that s/he will not suffer from its effects.

I also appreciated the identification of what an infant’s grieving stages may look like. It offers adoptive parents to drop into a place of empathy and to not take this as a personal rejection or that somehow your parenting is subpar. With that said, I think it would have been useful for Verrier to identify ways in which an adoptive parent can look for attachment wounds they may still harbor so that they know that they may need to get assistance as well. I think that spending some time identifying activities to assist adoptive parents in recognizing their expectations (many of them unconscious) for their child, family, and parenting style, and then walk them through some ways to mourn to very real possibility that things may not go that direction.

Neuroplasticity, the brain’s ability to rewire itself, is a subject that I don’t think Verrier spent enough time on. I think it’s important to impart the real trauma that has occurred and to not undermine its very real effects, however, to not provide and instill hope in adoptive parents leaves these adoptive parents, the only parents rearing this child, in a state of helplessness. Some more education about how neuroplastic a child’s brain is, especially between the ages of birth and two, would be helpful. This allows parents to see how they could make very real healthy, structural changes to their child’s brain to help mitigate some of the effects of the separation trauma.

Additionally, spending some time addressing how to provide more opportunities for attachment with the infant would be useful. Or maybe a conversation about attachment therapists. Such as: when should an adoptive parent seek out this type of professional?, what can what expect of this type of therapy?,  what are questions one should ask of an attachment therapist to ensure a good fit? I feel like the lack of proactivity in this section leaves adoptive parents, and even clinician with a profound sense of helplessness. This may be the author’s intent in order to have adults be able to better identify and empathize with their traumatized children. However, if that is in fact the intent, that does not do much in regards to assisting parents on how to use that empathy to best provide for their child(ren).

This section is focused on the behaviors that adopted children may show that illustrate the presence of the attachment trauma. This can be very helpful for therapists and adoptive parents to recognize and empathize with what these behaviors mean. It may also normalize the experiences of adopted children, who now may be adults, who acted in ways that at the time did not seem to make sense. I appreciated the time Verrier took to address not only the experiences of the adopted child, but also the dynamics that arise with other biological children in the house, the adoptive parents, and the birth mother as well (I really appreciated the way the author writes about the birth mother and the space she provides in the book to address the birth mother’s very real experiences. So far, in the books I have read, she barely ever is discussed, and she, of course, is incredibly important in this dynamic).

It is in this section that Verrier starts to make suggestions and steps adoptive parents can take. She takes the time to address the differences one may witness in adoptees that were adopted at older ages versus infancy as well as the reunion process.

The time and care the Verrier spent on writing the importance of the reunion between the adoptee and the birth mother illustrates how pivotal this reunion is to adoptees and birth mothers. I especially appreciate the time the author spent discussing each set of people in the triad (adoptee, adoptive parents, and birth parents). She lays out the dynamics that arise within this triad, how things may play out, and the individual experience of each member within the triad. This not only normalizes the experience of each person within the dynamic, but also provide those who are “pre-reunion” with a framework of expectations.

One of the most powerful chapters was Chapter 14: “Empowering Ourselves”, where the author speaks directly to adoptees and the ways that they can address their attachment wounds. This was very powerful and an important read for everyone tied to the adoption.

If there is any part that is going to rub the reader wrong, it is this section. It is here that the author is careful to not take a pro-choice or pro-life position, but also shares some strong opinions that may not be shared by the reader. She voices that life starts at conception and criticizes those who do not subscribe to this belief. She acknowledges the hard fought struggle of mothers to be able to return to work, but also voices deep concern for children whose mothers place them in childcare as opposed to taking time off to rear their children.

There were very important bits of information in this section around similarities between behaviors of a child with Fetal Alcohol Syndrome and a child expressing behaviors indicative of a broken attachment. She describes the “wicked step-mother” dynamics and projections of the adoptee onto women in their lives. She even discusses the importance of recognizing the special limitations that adoptees have due to their early trauma. The issue is that due to the authors very strong opinions, I found it hard to retain the important information she was providing.

I found myself wanting to argue about the realities of today’s financial system, the amount of debt college students take on and to add raising a child on a single income seems like a pipe dream. If we add to that dynamic, the exorbitant cost of adoption within the United States, which is the only adoption system open to gay men, we set up a system in which children with attachment wounds are forced to reexperience them in child care so that his or her parents can continue to provide for him or her. The author makes all of this sound as though “one should have thought about that first”, which also rubs me wrong. If everyone took on her suggestions and advice then every generation starting with millennials would not have any children at all. If I were the author and was planning on addressing these issues at all, I would think that a better way of expressing these concerns is to zoom out and discuss how our systems have set all of our children up for attachment trauma. I would have like to see included in that conversation action steps for people to take such as contacting congressmen, or donating to organizations that do research on attachment trauma.

Another area that the author addressed, but without the depth I would have liked, was the role of fathers. Verrier does a great job illustrating how adoptive fathers are not usually the target of adoptees rage (as the primal wound was done by the mother’s perceived abandonment) and thus don’t recognize that they need to or how they need to better support their wives. I think some more action items would have been nice in this section Additionally, what of same-sex couples? What do the dynamics look like in lesbian couples? Are the relationships between child and both mothers tumultuous, or does the child seem to pick one mother at a given time to enact his or her anger towards? What of gay fathers? Do neither of them receive this anger?

Overall, I do think that this was a good book. I think that there is important information in it that is not covered in any of the other books or articles that I have read so far. With that said, I do think that if the layout were more similar to that of Twenty Things Adopted Kids Wish Their Adoptive Parents Knew by Sherrie Eldridge, the medicine would have gone down smoother.

On a personal note, I definitely want to thank my online friend Irene. I met her is a foster/adoption Facebook page many years ago and she has been incredibly supportive. She has reminded me that many of these books don’t just focus on the prospective adoptive parents who are researching in earnest in order to be the best adoptive parents that they can, but also those parents who already believe they know it all. The one’s that may be blind to attachment wounds and their symptoms, feel completely secure, and thus don’t see their blind spots. Keeping that in mind does help me ground myself when I start to feel overwhelmed by the need to fix everything- especially since I have no child as of yet, and my prospective future child is not yet born. (Clearly, I have a tendency to think ahead). Thanks Irene for talking me out of the proverbial tree!